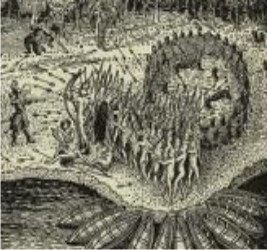 Confidence and belief are often allies.

His father (and grandfathers) were great sailors but he was the greatest of them all. An exceptional man does exceptional things. Any attempt to determine what distinguishes an exceptional man from an ordinary man is bound the lead to argument and controversy but perhaps we can give it a try.

In 1603, under the sponsorship of Sieur de Monts he crossed the Atlantic and explored the St. Lawrence River down to the Lachine Rapids. Let us not forget he is not among the first to arrive on the coast of Canada but to venture deeply into the river was an act of bravery and faith that no ordinary man would undertake.

He returned again a year later, exploring more, writing about the land and making maps. He found a good harbour at Port Royal but continued to search for a better site and headed south and came to a cape on the main land south and further on, three or four rather high islands and a large bay.

It may be interesting to note here that these are the years when Galileo was trying to convince the Catholic church that the earth revolved around the sun and not the other way around. That is to say Champlain embarked into the unknown, as an educated man, with very little education regarding the region of the world he was about to enter.

As Champlain was sailing up and down the coastline of this strange new land, yet to be fully understood by Europeans, in a small cove, he came upon a few natives in a canoe, who upon seeing the Europeans, beached their craft and began to dance.

Champlain, his confidence bolstered by superior weaponery and knowledge based on reports of previous encounters with natives, felt no compunctions about going ashore to introduce himself. He generously gave each a knife and some biscuits. They danced again, apparently this time with greater enthusiasm and excitement. Even though their cultures had separated and followed completely different paths many generations before, gifts were a apparently a universal expression of good will that both the indigenous native and the univited newcomers shared.

Champlain took out a crayon and drew a map of what he knew of the local area on a parchment, the bay, and the Island Cape. With the same crayon, on the same parchment, the natives drew the outline of another bay and placed six pebbles at equal distances apart representing as many chiefs and tribes. The idea of maps and marks was another universal understanding that bound these two uncommonly different cultures together. And they both believed their maps to be an accurate interpretation of their immediate environment. It was a shared belief.

The regions around the Saint Lawrence River have a lush ecology. The natives cultivated the land and sowed seeds. All along the shore a great deal of land was planted with Indian corn. Cultivation is also part of a shared past.

More natives appeared and made a signal with smoke to show the place of their settlement. The atmosphere was friendly and welcoming. The Europeans anchored and sent a boat with knives and cakes to shore. This place was more populated than any others they had seen. Two hundred natives lived among a large number of very fine walnut trees, cypresses, sassafras, oaks, ashes, and beeches. Large areas of the land were already cleared. Trees had been cut down three feet from the ground. The stumps were burned, then corn planted between the stumps. In course of time the old stumps and remaining roots were torn up and such clearings become fine meadows which attracted a wide variety of fine game and hunting was easy.

While Champlain was anchored, there was a harvest fine wild grapes, peas, pumpkins, squashes and very good roots. The natives made presents of this food in exchange for little trifles. Gift giving transforms as if by magic into trade and barter. Here are two cultures with a great deal in common. Both have much confidence in their beliefs but they also believe in very different things.

As well as the truly astonishing difference in metal technologies between the Europeans and the natives, is the difference in naval technologies. While the native birch bark canoes, brilliantly adapted craft for the smaller streams and rivers, are from eight to nine paces long, and about a pace across their middle, growing narrower toward the two ends and strengthened on the inside by little ribs of white cedar. They are so light that a man can easily carry one. When they want to go overland to a river where they have business, they carry them through the forest easily. But for deeper water the natives have crude, hard to manage, dugout canoes.

It takes a great deal of time and effort to cut down a large tree to make a dugout canoe. Once they fell the largest and tallest tree they can find, by means of stone hatchets, they remove the bark and round off the trunk. Then on one side they apply fire gradually along its entire length and sometimes add red-hot pebble-stones. When the fire becomes too fierce, they extinguish it with a little water, not entirely, but so that the edge of the boat may not be burnt. It being hollowed out as much as they wish, they scrape it all over with stones. The finished craft are crude vessels but the natives truly considered them fine. This is clear evidence that for whatever reason not all human technology progressed at the same rate, with the same level of confidence throughout the wide variety of cultures developed by homo sapien sapiens. Apparently not all beliefs are equal.

The natives bemused and puzzled Champlain. He gave a coat to Onemechin, a chief, who immediately gave it away because he felt uneasy in it.

During another ceremony a native wounded himself in the foot and blacked out. Many others surrounded him and sang for some time before touching him. Then they made some motions with their feet and hands, shook his head and breathed upon him. Then a French surgeon dressed his wounds and he went away in good spirits. Clearly both cultures believed that intervantion could heal but one culture appeared to be more successful at it than the other.

The next day, as they were caulking their shallop, the French discovered a number of natives doing some mischief. In order to put a good face upon their presence, the natives began to shout and dance, and advanced with their bows, arrows, quivers, and other arms. The French raised their muskets. They were frightened. The natives danced again in a circle, putting all their arms in the middle. The native finished their dance then withdrew in all directions. The French returned to their shallop and departed. The whole incident made them feel uneasy.

In 1608 Champlain established Canada's first colonial city, Quebec. The natives liked the European city and liked Champlain. They came to traffic in furs.

Champlain became very friendly with the Algonquin and Hurons living nearby. He believed his friendship prevented attacks on the settlement and that peaceful relations made it easier to trade and to explore the country. At any time the natives could have easily overwhelmed the garrison but Champlain's confidence and belief won them over as friends.

To confirm this alliance Champlain and two French companions joined an Algonquin and Huron party of sixty in a raid on their arch enemies the Iroquois. During the journey into Iroquois territory Champlain came across a beautiful lake which he confidently named after himself. That confidence was well justified, as four centuries later the lake is still primarily known as Lake Champlain.

The whole night before the fight was spent in dancing and singing, in both camps, and many insults were exchanged between the two opposing parties. The Huron told the Iroquois they would see a kind of warfare they had never seen before.

When the confrontation finally came, Champlain stood behind the Huron with his musket. His two French companions hid in the woods and waited for a signal. Warfare among the natives was rather ritualistic and understated in the new land. Three Iroquois chiefs wearing their feathers much larger than those of their companions advanced. They were easy to pick out and shoot. Champlain immediately dispatched two of them with his musket and one of the other Frenchmen shot the third. The Iroquois, who had never seen firearms before, took to the woods. The fight was won and the friendship between the Algonquin, the Huron and the French is strengthened. Champlain is a hero, a confident hero, and his beliefs are quickly adopted and the native way of life and their system of belief change. Jesuits get to work and natives are converted to Chritianity.

When war breaks out between France and England in 1626, the English attack French settlements in Canada. The natives begin to question Champlain's beliefs. Apparently no belief system is infallible and not amount of confidence is beyond erosion.

In 1628, an English army cut off supplies to Quebec and ordered Champlain to surrender the fort. Quebec held out for a year but surrendered after running out of food. Champlain is held prisoner in England until peace 1632 when he is released and returned to New France. He remains governor until his death in 1635 but his reputation among the natives never returns to what it was and scepticism regarding the European religion and way of life begins to creep into native culture. Four centuries later, some of that native culture has returned, some of that belief system still survives, and in some cases it flourishes.

So here is a man, cultured, adventurous, certainly, but no king among his own. By dint of his confidence and ingenuity he becomes as a king among others. Belief and confidence in the face of weaker alternatives prevails, but when the confident are humbled, belief is questioned.