THE MYTHS OF THESEUS AND THE MINOTAUR 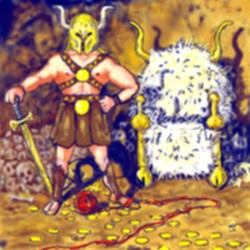 Our relationship with animals is a tale of overcoming fear. Most people have an instinctive reaction when encountering the unfamiliar and the unexpected. That reaction is overwhelmingly fear. That fear is particularly pronounced when the encounter involves an animal. Deep within us we believe animals will harm us and the domestication of animals is a demonstration that we can overcome, adjust to and change instinctive beliefs.

Human rituals that are centered around the baiting of bulls such as the 'Course au Coeur' in the Carmague where a mob of men try to snatch a ribbon off a bull's brow and the Hamar people of Ethiopia and their 'jumping the bull' are remnants of ceremonies that have been with us for almost longer than we can remember.

Long ago the people of Minos, an island empire located in the Mediterranean Sea, organized themselves into a cohesive, wealthy and efficient society. Soon their preoccupations transcended the immediate concerns of survival and brought the search for the reason for being to new levels of awareness.

With that search came preoccupations with their own ability to establish and maintain their ascendancy over the animals they once feared. Facing the Bull was a ritual ceremony performed in an arena, witnessed by a large number of spectators. Naked youths stood before the fierce, immensely muscular bulls with their enormous testicles and gleaming horns. The point of the ritual was not to kill the bull, but to conquer their fear of it.

They would run straight for its head, grip one horn in each hand, somersault through the rack of horns, across the bull's back, and skillfully land on their feet behind the beast, a trick frequently illustrated on Minoan pottery recovered by archeologists.

As legend has it, the great God of the sea, Poisedon, so taken with this demonstration of man's dominion over such a powerful animal, presented the King of Minos with a gift,a great, white bull on the condition it be slaughtered in a very special sacrifice. But such was the King's admiration of the beast that he could not bring himself to kill it. Under the cloak of deceit he put an inferior beast under the knife instead.

Suffering mighty offense, Poseidon, out of revenge, duped the great white bull into coupling with the King's unhappy wife, who was obsessed by her lust for the beast. In accordance with instructions given her by Poisedon she lay up in a fragrant meadow, covering herself in the hollow cavity of stretched cowhides with only her buttocks and her sex exposed.

The great bull ambled into the meadow, and mistaking the King's wife for a cow, shagged her with much enthusiasm. And thereafter, empowered by his rapacious conquest, he left meadow and trampled through the land, terrifying the people, destroying crops and vines. It was seventh labour of Hercules to capture the great white bull and put it on a boat to be carried away. He handed the bull over to the hero Theseus who dragged it through the streets of Athens up to the Acropolis and finally put it to death.

The progeny of the bull's coupling with the wife of King Minos was the Minotaur, a bizarre monster with the enormous body of a man and the head of a bull.

The Minotaur was recognised and feared for the monster it was and confined to the labyrinth beneath the city of Knossos and every ninth year, seven youths and seven maidens were sent below to appease him.

Theseus, arriving in Knossos, hears of the Minotaur, and determines to rid the world of the halfling, the vile issue of the great, white bull. He scented himself with oils and took the place of one of the youths. Ariadne, a woman who loved him with a deep and abiding passion gave him a ball of magic twine that would lead him through the labyrinth to the sleeping beast and back again. Theseus, the great hero and warrior, murders the Minotaur and follows the thread back to Knossos demonstrating that man is not beast, nor half beast and has dominion over beast.

The story of the Minotaur is the story of our belief that we are a species separate from the beasts. It is a belief that while recently has been undermined by modern classifications of biology, has not completely replaced the general belief that there is something different about us, a self-awareness, a belief regarding some notion of our possession of a soul. Understanding and overcoming our deeply instinctive fascination with, and fear of, animals is key to understanding that belief, the ability to believe, especially to believe in the unproven, is among the most important distinctions between ourselves and animals.

At the very least it is extraordinary that humans can triumph in contests of will and intelligence when pitted against the cunning, athleticism and brute force of the wild ancestors of our domesticated animals.

How could we, such relatively puny creatures believe we could hunt and kill an Auroch,a bovine monster that tramples through European forests, a creature so much greater and more physically dangerous than ourselves. People probably started hunting as scavengers. They may have followed and stalked herds of creatures waiting for the weak to die. Then they begin to kill those in trouble. The more successful this strategy is, the more it leads to aggressive attacks on healthier animals until it becomes true hunting. To hunt them successfully, the people had to understand them, their behaviour and habits. The more they understood them, the more they experiment with managing their behavior and the more control they exert over the animals' lives until hunting is replaced by the husbandry of domesticated animals.

A domesticated animal can be selectively bred in captivity and thereby modified from its wild ancestors for use by humans who control the animals' selection of mate and food supply. In spite of a number of exceptional instances where unique animals are domesticated by specific cultures in specific geographies, in reality, there are only five widely distributed, domesticated animals:- the cow, sheep, goat, pig and horse.

Large animals like cows and horses are an especially important component in the development of mankind. They provide meat, milk, fertilizer, transport (both domestic and military), engines for plowing and milling, wool and germs. The germs kill previously unexposed people and immunize those exposed over a long period. Thus a germ resistant population of people emerges.

Along the way the wolf ancestor of the dog joins the human at the kill, just as the hyneas and the vultures join the lion. The dog progresses in the role of partner in sniffing the animal out and help bringing the prey down. People encourage the best and most friendly. The best and most friendly begin to copulate and procreate and people encourage the dogs most suited to communal living. A relationship is formed. Bonds are strengthened.