WHO ARE YOU CALLING PRIMATIVE? 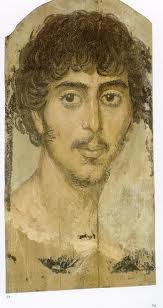 WHAT'S PRIMATIVE ART AND WHAT ISN'T...

Fayum portraits are naturalistic pictures of people painted on wooden boards attached to Roman mummies in Eygpt but the images come from Graeco-Roman traditions rather than Egyptian ones. Fayum portraits show the influence of Classical and Hellenistic art. Due to the dryness of the climate, their brilliant colours are frequently very well preserved and they look like what anyone might call a ‘proper’ portraits.

In 1615, Pietro della Valle’s said of them, they allow us literally and figuratively to come face to face with the past.

They date to the Roman period around the time of Jesus and the nativity and crucifixion and production continued to the middle of the 3rd century. They are among the very few survivors of panel painting from the classical world.

They may have been painted during the sitter’s lifetime or after his or her death but they were produced on an industrial scale in workshops much as tourist paintings are produced today. Fayum painters did not invent the industrial production of this type of art. It was well in evidence in the terracotta votive heads made by the Etruscans in the 3rd century BC, which themselves form part of a long tradition going back at least to the 7th century but they were considered by many ‘experts’ as repetitive and formulaic in the use of proportion and technique.

Giovanni Paolo Lomazzo, writing in the 16th century, observed.. we may ?nd many painters who, being ignorant of the art of proportions, have been reputed good workmen.

Workmen? Was Giovanni talking about the same paintings that are now national treasures?

And here is something we may wish to think about. Humans believe, education can produce experts who can find evidence and assemble that evidence into a sufficiently compelling story so convincingly that it turns what we believe into what we believe we know. In this case, at the risk of being too simplistic just to make a point, that the renaissance artists invented realistic painting. That is a myth that has been repeated so many times that it would be very difficult to demonstrate to the average art gallery attendee that the fayum portraits along with ancient Greek and Roman sculpture and mural painting obviously disprove the statement.

While most educated art historians would understand the nuances of what is meant by realism and perspective in the context, it is lost on the general population and the general population was very comfortable, at least until recently, that modern times, in the context of painting, started in the 16th Century. They believed it to be true. They were taught it. The fayums demonstrate that modernity has been with us for a lot longer than that and it is possible that the primatives, chose to paint primatively, and not because they were ignorant or couldn't.

But if people slavishly believed what we were taught, 'truth' would never be challenged. Could it be that somewhere within us, we believe that we are not being taught the 'truth' and that the 'truth' has not yet been understood, or even more profoundly, that it cannot be understood and that we will not settle for believing anything but the 'truth'?